In last Friday’s post, I noted that customers often want a new home that looks like “it’s been here forever.” And just this morning, another perfect example of the New Aged look popped into my inbox. I heard from Barbara in the North Dallas area who is settling into her new home that looks anything but new. 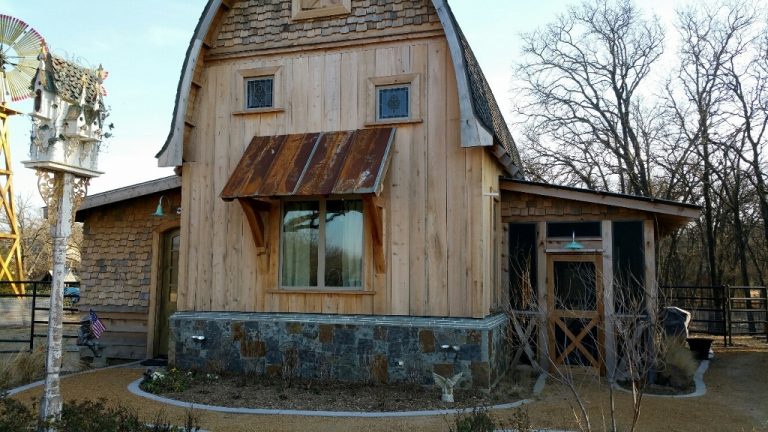 “My son is an architect and developer, and we recruited him to build us a home for retirement in so we could be closer to our grandchildren,” Barbara says. “Jason wanted a design that looked like it had been here for a long time and one with the environment. He loves old New England architecture and the shabby chic look that is popular today.” An artist at heart, Jason also has a keen eye for distinctive styles and décor. 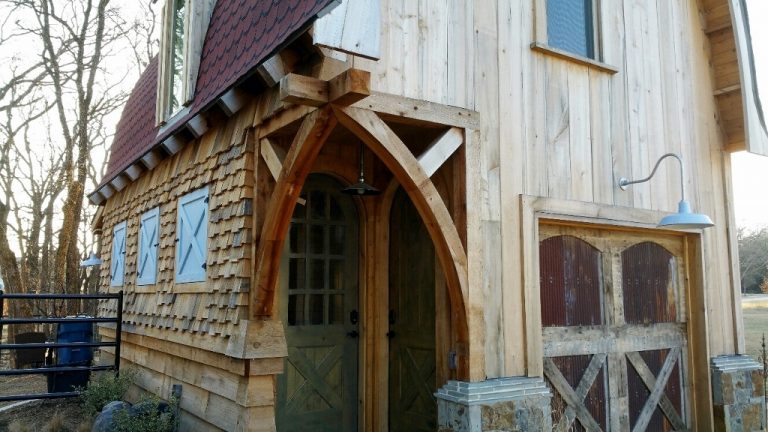 When it came to choosing exterior lighting for Barbara’s new home, Jason returned to Barn Light Electric where he had purchased lighting in the past for other clients. The façade of Barbara’s home is finished in earthy tones so Jason looked to add splashes of color with thoughtfully placed porcelain enamel gooseneck barn lights.

“As you can tell from the roof lines of the home, the lighting had to have curves or he’s not happy,” Barbara explains. “He claims that curves give him infinity whereas straight lines box him in.” 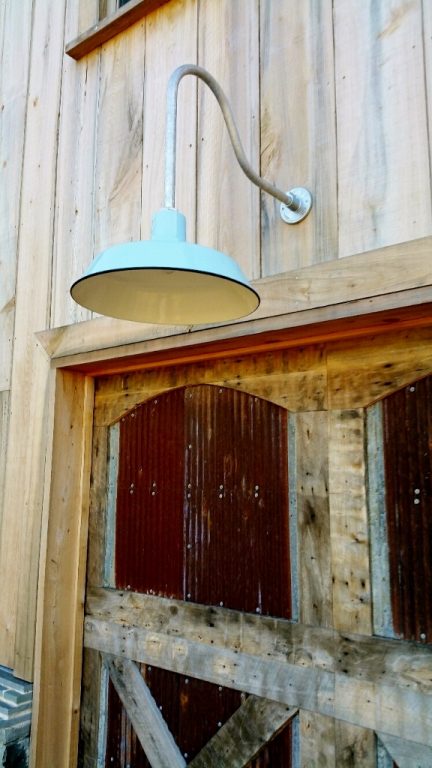 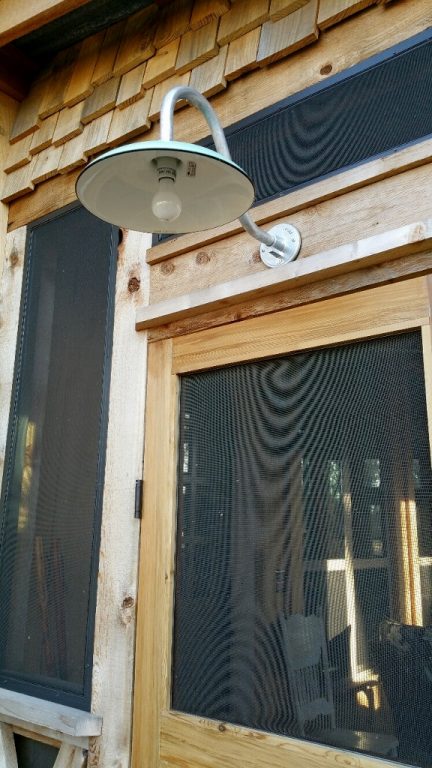 For the porch door, a complementary Goodrich® Sinclair Porcelain Gooseneck Light features a more shallow bowl than the Sky Chief. This handcrafted shade is slightly smaller at 14″ and features a creamy Jadite finish, and G22 gooseneck arm in Galvanized. 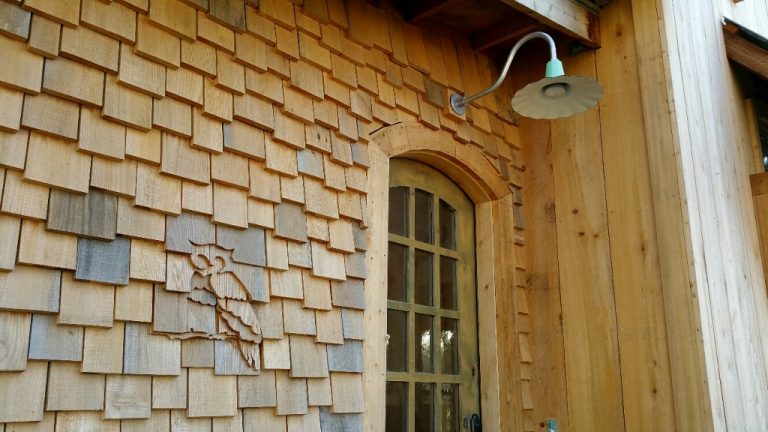 The curvy shade of the Goodrich® Seaside Radial Wave Gooseneck Light caught Jason’s eye for the front door. A generous splash of light is thrown from this 16″ shade which is also finished in Jadite. 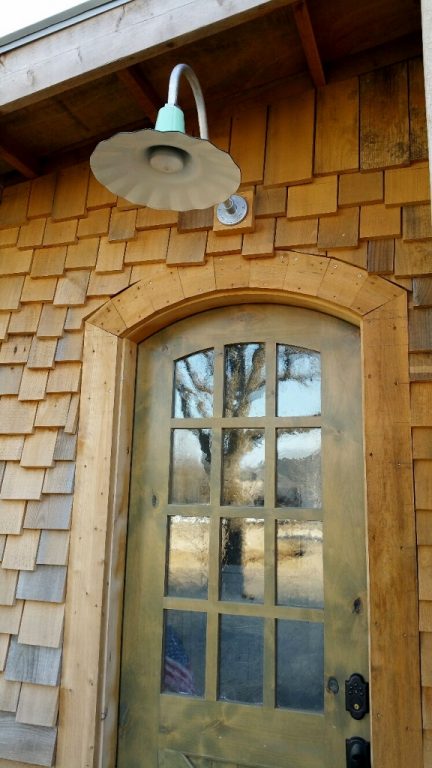 “Jason liked the radial wave as it reminds him of old street lights and lights found at old filling stations,” Barbara says. These classic lights were often found at roadside service stations back in the 1930s and 40s. 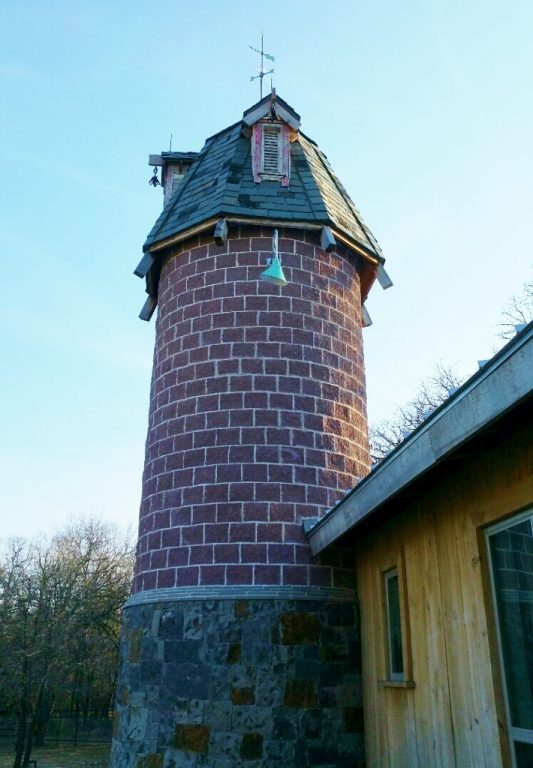 The most eye-catching piece of Barbara’s new home is the silo which is highlighted by a Goodrich® Fire Chief Porcelain Sign Light. This 14″ shade is finished in Jadite with a G24 gooseneck arm.

“Jason loves the silo, which is our shower, and he wanted the sign light placed high up there to highlight this feature,” Barbara notes. “We love the colors of the barn lights, the quality, and that they’re made in the USA. Jason loves the diversity of choices offered from colors to curves to shades to sizes. He could order exactly the style and effect he wanted for each individual location. I’m glad he made the decisions because it would have been hard for me to make up my mind!”

Guest Blogger | 9 Ways to Decorate with the Color of Love